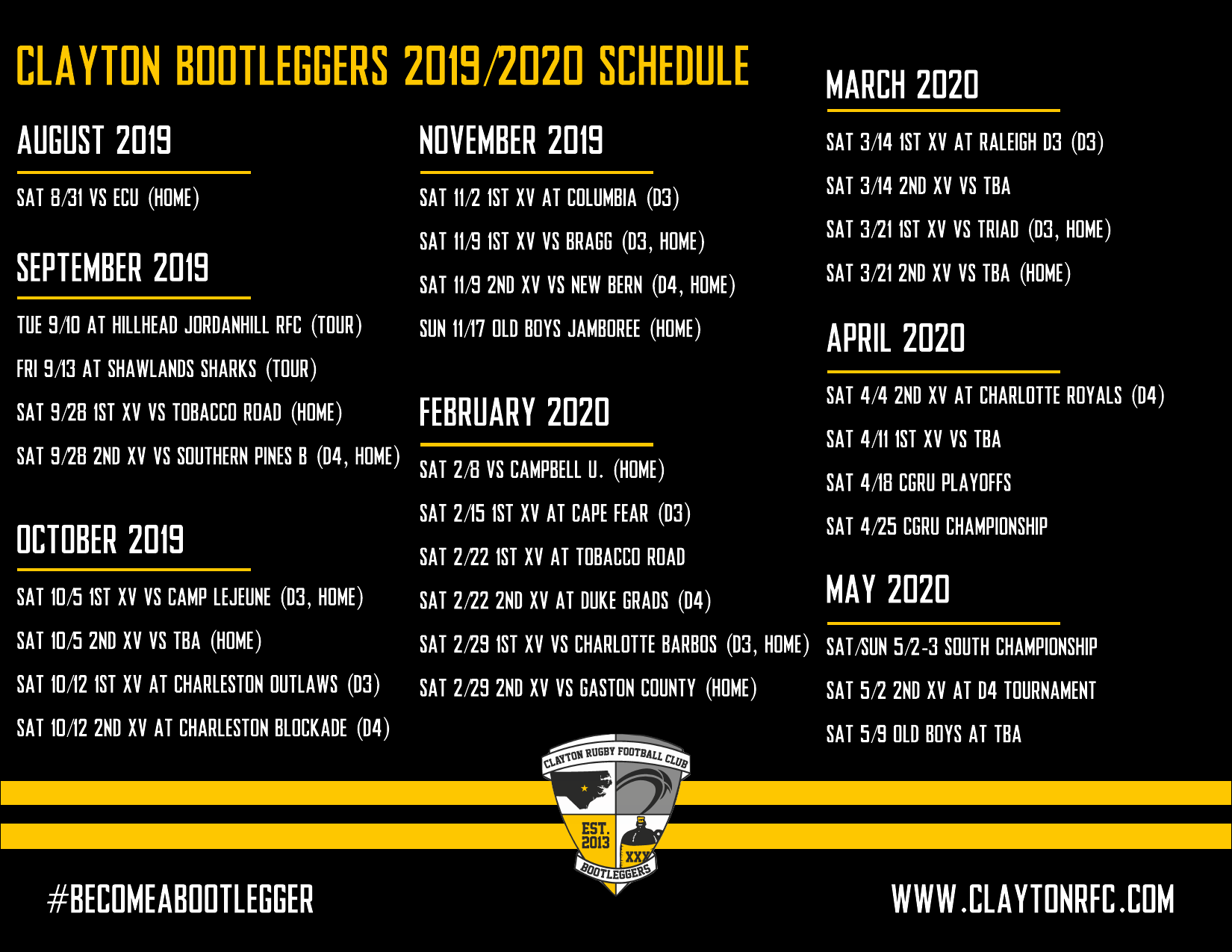 CLAYTON, NC – As the summer comes to a close, the Clayton Rugby Football Club has released their schedule for the 2019/2020 season. The club has a busy season ahead with a full slate of matches on the books for both the club’s 1st XV, 2nd XV, and the first official action for the club’s Old Boys team. The club opens up their slate with their annual pre-season scrimmage against the ECU Pirates. This is the fourth season in a row for this fixture as the two clubs have built a close relationship over the years. Multiple ECU alumni now take the pitch with the Clayton RFC as the club hopes to see that trend continue. The Bootleggers then take their rugby overseas as the club embarks on their first-ever international tour to Scotland. While in Scotland the Bootleggers have two matches planned along with training sessions and visits with other clubs. They open up their tour against Hillhead Jordanhill RFC on Tuesday September 10th and then follow on Friday September 13th against the Cartha Queens Park RFC’s Shawlands Sharks.

“We’re expecting to have two fun, but tough matches while on tour,” said Club President Ted Hardy. “It should be a great experience for our members and players both on and off the pitch. Tours are great opportunities for team bonding and we hope this helps galvanize our club for the upcoming season.”

As with last season, the Bootleggers’ 1st XV is participating in the Carolinas Rugby Union Division 3 competition. After trips to the CGRU D3 semifinals each of the past two seasons, the Bootleggers are gunning to get over the hump as they fight for the CGRU D3 Championship. It won’t be an easy road to the playoffs as the club’s 1st XV faces a difficult schedule that includes some incredibly tough road trips. Their first big away test comes on October 12th as they hit the road to take on the Charleston Outlaws, who were relegated from Division 2 this past season. The 1st XV follows with another tough road match in early November against Columbia. Then they open up the second half of their season on the road against Cape Fear who ended the Bootleggers’ playoff run last season and have become one of the club’s top rivals. The Bootleggers’ 1st XV also faces some key matches down the final stretch of the season as they tackle the Charlotte Barbarians, Raleigh D3, and Triad all in the final weeks of the regular season.

“We’re really excited for this upcoming season,” added Club Captain Gareth Davies. “We have a lot to build off from our finish last season.  We had a great summer on the recruiting front and added some players whom I think will play a huge role in helping us compete for a CGRU championship. We have to continue working hard on and off the field so that we can achieve that goal.”

The club’s 2nd XV faces an expanded Division 4 competition as the number of clubs participating in D4 has grown from four to seven clubs for the coming season. The expansion also includes a couple of tough road trips on the schedule. The Bootleggers’ 2nds open up with a tough fixture against Southern Pines B. They then follow with a road trip to face the Charleston Blockade. The 2nd XV then takes on New Bern to finish off their first half of the season. In the second half of the season the 2nds have road trips to face Duke Grads and the Charlotte Royals along with a home tilt against Gaston County. Mixed in with their D4 matrix games are also a handful of friendly matches that are yet to be announced.

“We’re excited about our 2nd XV schedule and it’s wonderful to see more clubs getting involved in D4,” added Hardy who is also helping coach the club’s 2nd XV this season. “We have a great group of new recruits that came to our club over the summer. They are mixing in with some of our 2nd XV veterans and a few club stalwarts that have stepped down from 1st XV play. We should have a great mix this season.”

Last, but not least is the official addition of an Old Boys side for the Clayton RFC. The club’s Old Boys are hosting a jamboree in November to bring together area Old Boys for a fun day of rugby. The Old Boys plan on scheduling another 2-3 games this season and have plans to play in one tournament. The club was founded with a heavy influence from Old Boys, who carried the torch during the club’s early years. As the average age on the club’s sides continues to drop, a number of Old Boys have eased their way into retirement from competitive play. This has opened the door to building a formal schedule for the group.

“Our #1 goal as a club is to provide playing opportunities for every type of player,” said Hardy. “Whether you’re old, young, experienced or inexperienced we want to have a place for everyone. Getting our Old Boys up and running fills in another piece of that puzzle. Our next challenge is getting our U23 Academy side off of the ground. With the influx of young talent we’ve had this summer, we’re well on our way.”

The Clayton Rugby Football Club began pre-season training this week and practices every Tuesday and Thursday night. The club is actively recruiting new members, both playing and social. To learn more about the club or how to become a Bootlegger, follow this link or contact the Clayton RFC at [email protected]