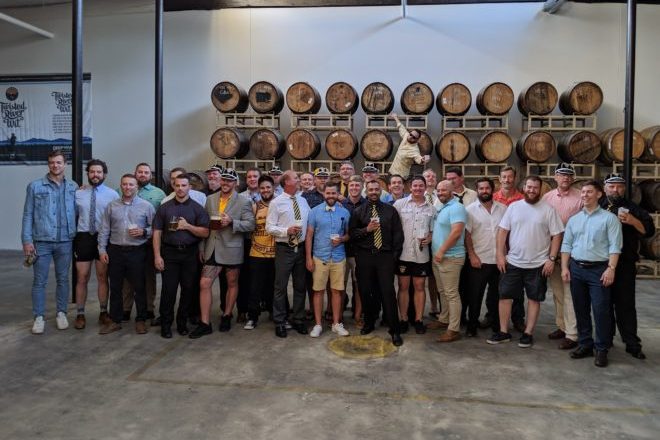 CLAYTON, NC – The Clayton Rugby Football Club officially closed out their 2018/2019 XVs season with the club’s Annual End of Season Banquet. Hosted by Deep River Brewing Company, the banquet was a celebration of another great year of rugby and fellowship. The banquet brought together members, both old and new, as well as sponsors and supporters of the club.

The main attraction was the announcing of the club’s annual award winners as voted upon by the players.

1st XV Most Valuable Back – Austin Lyons, Outside Center

A newcomer that joined the club at the end of last summer, Lyons quickly showed his skill and pace that he brought from his time playing at the Air Force Academy. Lyons set a club single-season record for tries scored with a whopping 17 tries while only playing in 9 games due to his military service. Lyons was also selected to play for the Carolinas Selects 7s at the Las Vegas Invitational and for the South Panthers U23 side this season.

Davies collects the club’s Most Valuable Forward award for the second time (also in 2016/2017) after a banner season. Davies took over the reigns as Club Captain at the beginning of the season and led the club’s 1st XV to a 9-4 record, 2nd place finish in D3, and the club’s first-ever home playoff match. Davies scored 14 tries this season in 12 games. Davies was also selected to play for the South Panthers on two separate occasions this past spring.

One of the elder statesmen in the club, Allen served as an important role player on the 1st XV and led the 2nd XV with his experience. Allen appeared in a total of 17 matches this past season between the 1st XV and 2nd XV. He scored one try for the 2nd XV, but provided go forward all season as he led an inexperienced 2nd XV.

Rookie of the Year – Alex Branoff, Inside Center/Wing

Branoff joined the club midway through the fall and made an immediate impact. A former wrestler, Branoff proved to be a quick study as he helped provide some depth in the Bootleggers’ backline when the club was hit hard by injuries in the fall. Branoff appeared in a total of 9 games this past season, seeing equal time between the 1st XV and 2nd XV. He scored a total of four tries including one in his debut.

Clayton RFC Head Coach Rich Munro awarded Barley with the club’s Coaches’ Award for his hard work and dedication throughout the season. Barley attended more practices than any other Bootlegger. His work and attitude was an asset through the club. Barley appeared in a total of nine matches this past season, mostly seeing game time on the club’s 2nd XV. Barley is also a fixture at all club events, fundraisers, and community outreach events while also serving on the club’s Board of Directors.

During the 2018/2019 season, the Clayton RFC saw a number of members cross over the half century mark in regard to matches played for the Bootleggers. The club recognized these achievements with the awarding of the first Caps issued in club history. Each member in the Half Century Club were issued customized caps to commemorate their achievements and dedication to the Clayton RFC.

Head Coach Rich Munro was also awarded a Half Century Cap for being on the sideline for well over 50 games as a coach.

The club expects to see a few more members reach the half century mark next season with one member within reach of becoming the first member to reach the century mark.

The 2018/2019 season was the club’s fifth season in existence and it is important that the club honor our volunteers that work hard behind the scenes to make sure that our members have rugby. Even though they don’t play much rugby, their contributions to our club are just as significant (if not more) than what takes place on the pitch. These members received commemorative Caps to recognize their commitment to the Clayton RFC.

With XVs season officially over, attention now turns towards the upcoming 7s season. The Bootleggers are fielding two 7s sides this coming summer with some talented players suiting up for what is shaping up to be a great summer. The club’s XVs pre-season training begins in mid-August as the club begins preparing for the 2019/2020 XVs season. The Bootleggers are off to Scotland in early September for the first international tour in club history before returning to start their season at the end of September.

To learn more about the Clayton RFC, inquire about joining the club, or seek sponsorship opportunities please contact the club via email at [email protected]